Nagoya-Japan, October 22th, 2018 – Prodrone Co., Ltd announced today that it ranked 8 in the 16th Japan Technology Fast 50, with revenue (sales) growth of 672.44% based on the past three accounting periods. Japan Technology Fast 50, announced annually by Deloitte Touche Tohmatsu LLC, is a ranking of the 50 fastest-growing Japanese companies in the technology, media, and telecommunications (TMT) industries based on their revenue (sales) growth percentage based on the last three accounting periods. 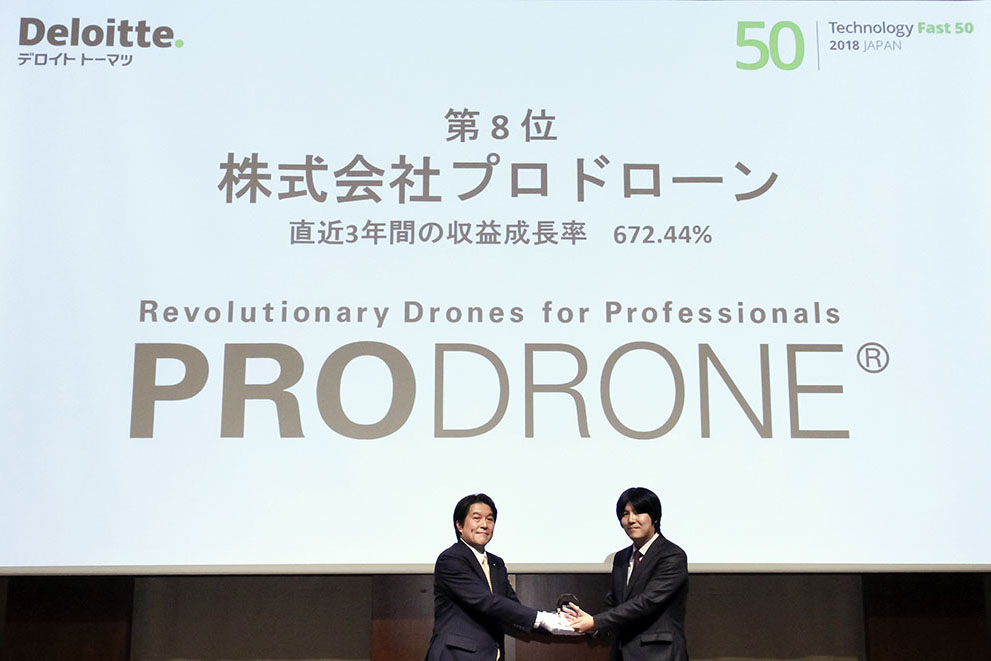 “Fast 50 is the significance to be a prize because it evaluated the growth potential of PRODRONE, based on a simple “number” that is “growth rate based on revenue (sales) in the past three years.

We are the first award this time, but there are many companies that have been ranked in many times among 50 companies. Fast 50 which is evaluated based on “rate” instead of “amount”, it will be difficult to be award as the company grows. Hope we could be a prize again in near future.”

About the Technology Fast 50 Program

Japan Technology Fast 50 is the Japanese edition of the ranking series organized by Deloitte Touche Tohmatsu Limited, an international public accounting and consulting firm that ranks companies among TMT industries based on their recent revenue (sales) growth based on a three-year period. Because the revenue growth rates are used as indices, the ranking indicates the fastest-growing companies regardless of their sizes. Entries are accepted from both listed and unlisted companies and they are automatically nominated for the Deloitte Technology Fast 500 Asia Pacific that encompasses all technology industry segments including hardware, software, communications, media, life sciences and clean technology.