HOME > Press Release > The Nation’s First Long-Distance Delivery Experiment by Single Helicopter Drone will start. The agreement has been signed among the cities of Shima, Gamagori and Omaezaki, KDDI and PRODRONE

The Nation’s First Long-Distance Delivery Experiment by Single Helicopter Drone will start. The agreement has been signed among the cities of Shima, Gamagori and Omaezaki, KDDI and PRODRONE

The agreement to cooperate on Long-Distance Delivery Experiment by Drone was signed on September 3rd, 2019 among the 3 cities of Shima (Mie Pref.), Gamagori (Aichi Pref.) and Omaezaki (Shizuoka pref.), KDDI and PRODRONE. The experiment will include the delivery of 175km distance by a single rotor drone, which will be the longest distance to be experimented in Japan.*1 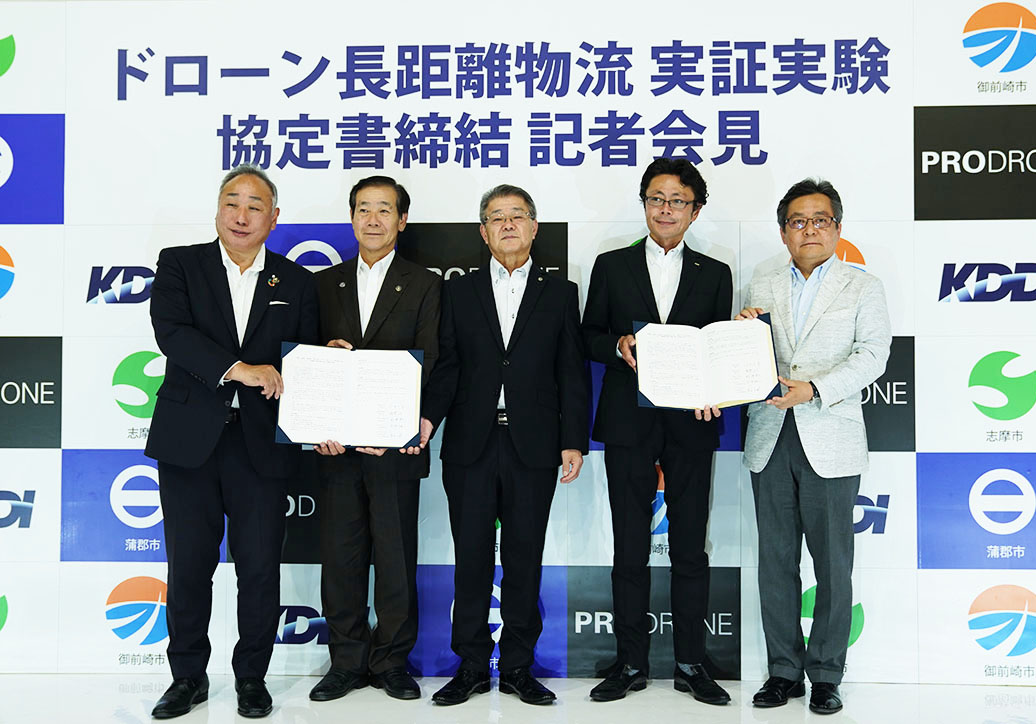 The demand on developing new logistic system is higher than ever before due to the increase in logistic volume from Internet shopping and the decrease in population and labor power. The new logistic system is required to enable a quick and smooth distribution in emergency under a weather disaster or earthquake.
Considering the circumstances around us, the government started to expect the implementation of BVLOS flight and autonomous flight by drone.*2
KDDI and PRODRONE will start the demonstration experiment for long-distance delivery drone which will operate the 70km distance between Shima-City and Gamagori-City and the 175km distance between Shima-City and Omaesaki-City for the purpose of establishing a solution structure for the drone operation of long distance with large payload.

There are 3 solutions that will be tested under the experiment

1) PRODRONE
PRODRONE has been developing various types of industrial drones that could satisfy customer requirements. Our responsibility in this experiment is to develop a drone which can operate long distance with large payload (Single Rotor Drone with Gasoline Engine). In addition, we are targeting to provide logistic companies with a platform that can offer the video footage and the movie distribution operated remotely by using the UAV flight system in emergency.

4. Comments from the Mayors on the experiment

This demonstration experiment will be a chance for us to start working on the revitalization of the local economy from air such as transportation of local food by drone and aerial sightseeing by passenger drone. This new logistic method will give us an opportunity to expand the business by transporting fresh food. We are excited to see the market expansion of our local food such as Ise lobsters, abalones, turban shells and Matoya oysters.

Gamagori-City has a port and is located closely along the Tomei Highway, Shin-Tomei Highway and Route 1 with also having an interchange of Route 23 bypass. The drone experiment will add an aerial channel to the existing ground and water channels, which will increase the possibilities of our new logistic options. We will learn more about the best suited distribution method for our local food and will try and create a new value for our products.

Omaezaki-City has been considering the usage of drones for emergencies such as disaster investigations and search and rescue. We are expecting to use the drones for transport of emergency relief goods and the rescue operation. In addition, it is hoped that the drone delivery will help resolve the problem in manpower shortage and also provide us with the additional values by transporting heavy loads and fresh food, assisting us with improving and expanding the Omaezaki Brand agricultural products. 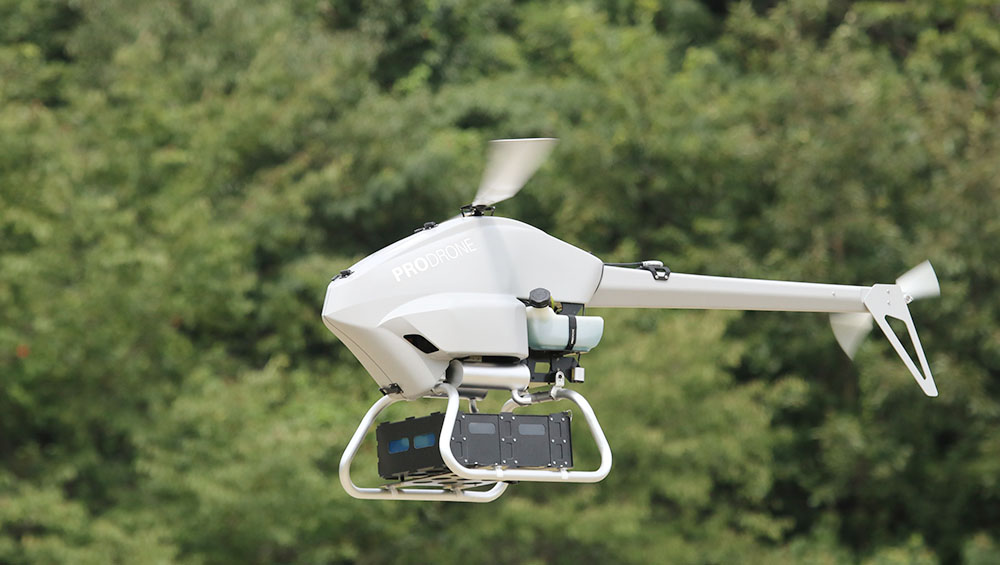 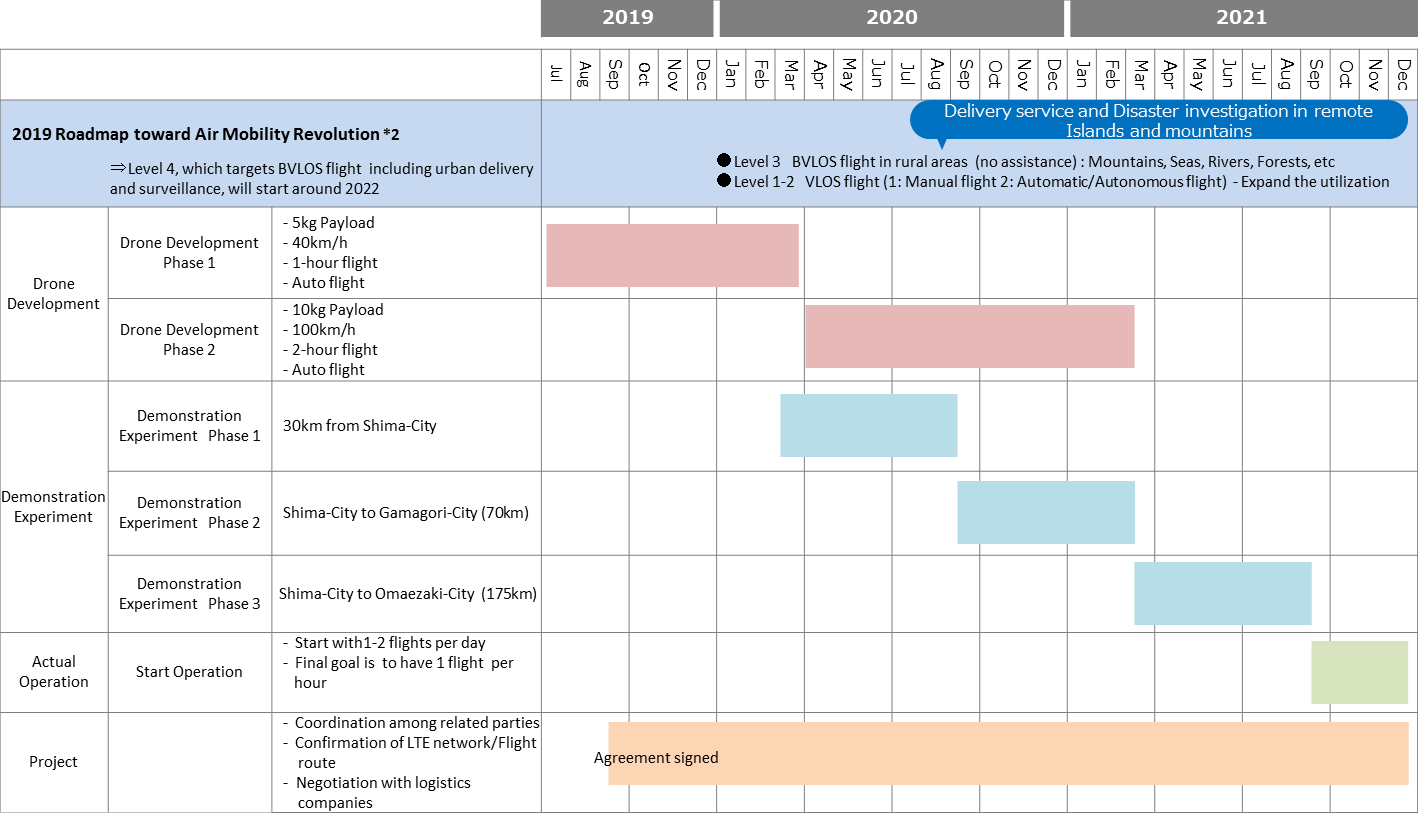 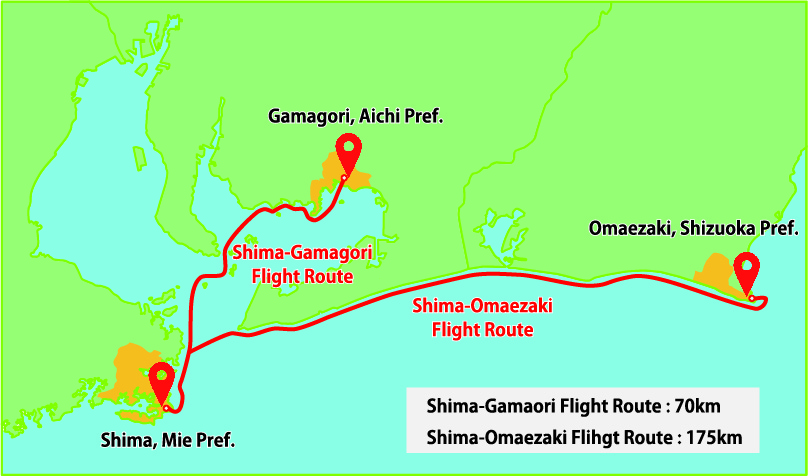 *1 Research by Prodrone as of September 3rd, 2019
*2 2019 Roadmap toward Air Mobility Revolution by Ministry of Economy, Trade and Industry（https://www.meti.go.jp/policy/mono_info_service/mono/robot/drone.html）