Overall
Kajima Corporation investigated the biological environment and topography information under the water using “SWANS” to efficiently monitor the status of corals.
In this experiment, Kajima attempted to monitor coral distribution more quickly and accurately by shooting both sky and underwater with the floating type drone.
Observation photograph by the diver is common in the investigation of the coral, but it takes time and cost. In addition, there are many obstacles such as reefs on the coast; ships cannot easily approach the survey spot. The observation using drone only from the sky is capable of wide-area shooting in a short time, but it was difficult to determine coral condition in detail.

Experiment Details
This drone with waterproof performance can investigate aquatic life and topography in shallow water. By giving buoyancy to the four rotor parts and the center part of the fuselage, it became possible for the drone to land stably on the surface of the water. Camera mounted in the dome port at the bottom of the fuselage shoots bird’s-eye view images from the sky and underwater footage, and transmits and records it in real time with GPS position information. In addition, it has an ultrasonic type sensor, which can measure water depth and seawater temperature necessary for coral growth evaluation.
In this investigation with the help of the GPS information, it is not necessary to submerge markers such as quadrats (rectangular frames) and lines on the sea floor by human. This has greatly reduced time for investigation and improved safety.
The verification test was conducted at coral reefs of about 5,000 m2, including the coral reclamation area using the coral net (*) in the Kerama Islands sea area. The drone confirmed the reef from the overhead view from the sky and photographed while moving on the surface of the water after flying and arriving at the point determined by the operator. It has been confirmed that it is possible to examine the distribution of coral and its type by underwater photography after landing. By accumulating the video recording together with the location information of the shooting point, it is also possible to continuously monitor the coral reproduction area utilizing the coral net.

By conducting a detailed survey using this drone, it will be possible to plan an effective deployment of coral nets by making coral seafloor map, which can be utilized for regeneration of coral crowd. We are also studying the application of 3D images of ocean floor topography and ocean observation techniques such as water quality and flow rate, using photographed images and data obtained from various sensors to be additionally installed.
* Coral net: Kajima Corporation (Kajima Corporation) developed artificial foundation to achieve a revitalization technique of coral counties in 2013 to maintain biodiversity. 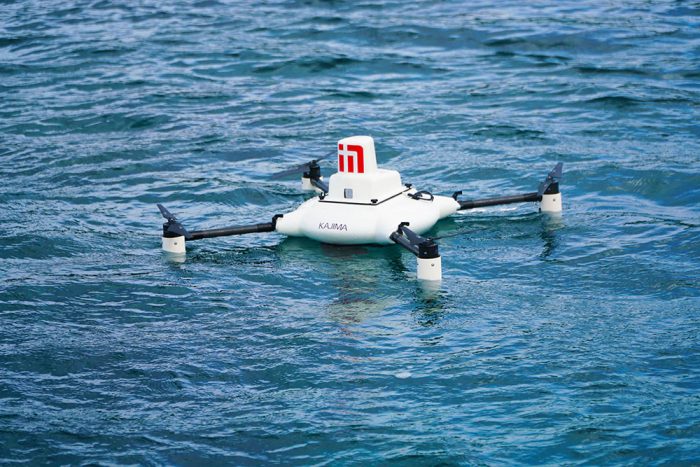 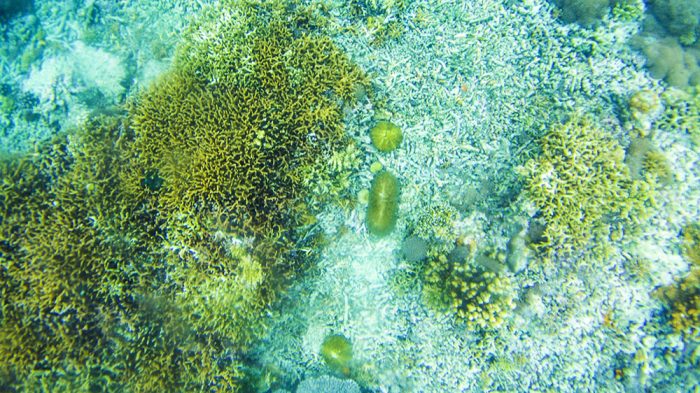 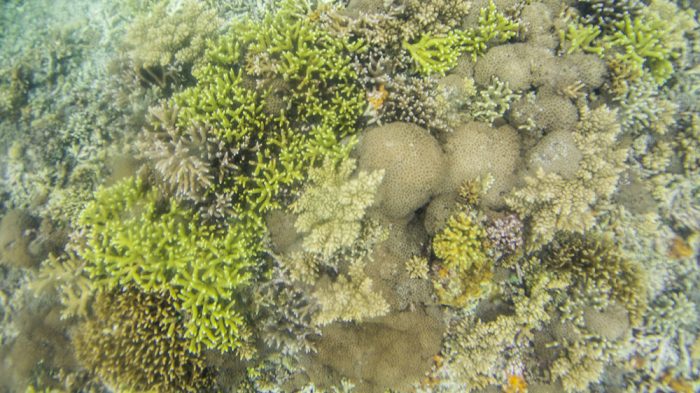 Picture under water right after the landing（Photo by Kajima Corporation）